The Road To Las Terrenas

In July 2014, I was invited to stay with a friend and her roommate in the Dominican Republic for a week.  They were teachers on summer break volunteering in the small beach town of Las Terrenas.  Back then I was traveling on modest means so any invitation for free accommodation in a paradise was welcomed with open arms.  Although I would meet up with them once I got there, it was the first time I would be traveling alone to a foreign country.

At the time, I had a connect at an Airline and secured a buddy pass for the trip, which meant I was flying on standby.  I connected in Philadelphia and sat in the airport waiting for my name to be called for Santo Domingo.  I got nervous because it was going to be a full flight.  Sure enough, even though I was next in line to be called, I, and two other standby passengers didn’t make it.  My bags were on the plane, but I wasn’t.  The agent told me that the next flight to Santo Domingo was not until the next day.  I slightly panicked. 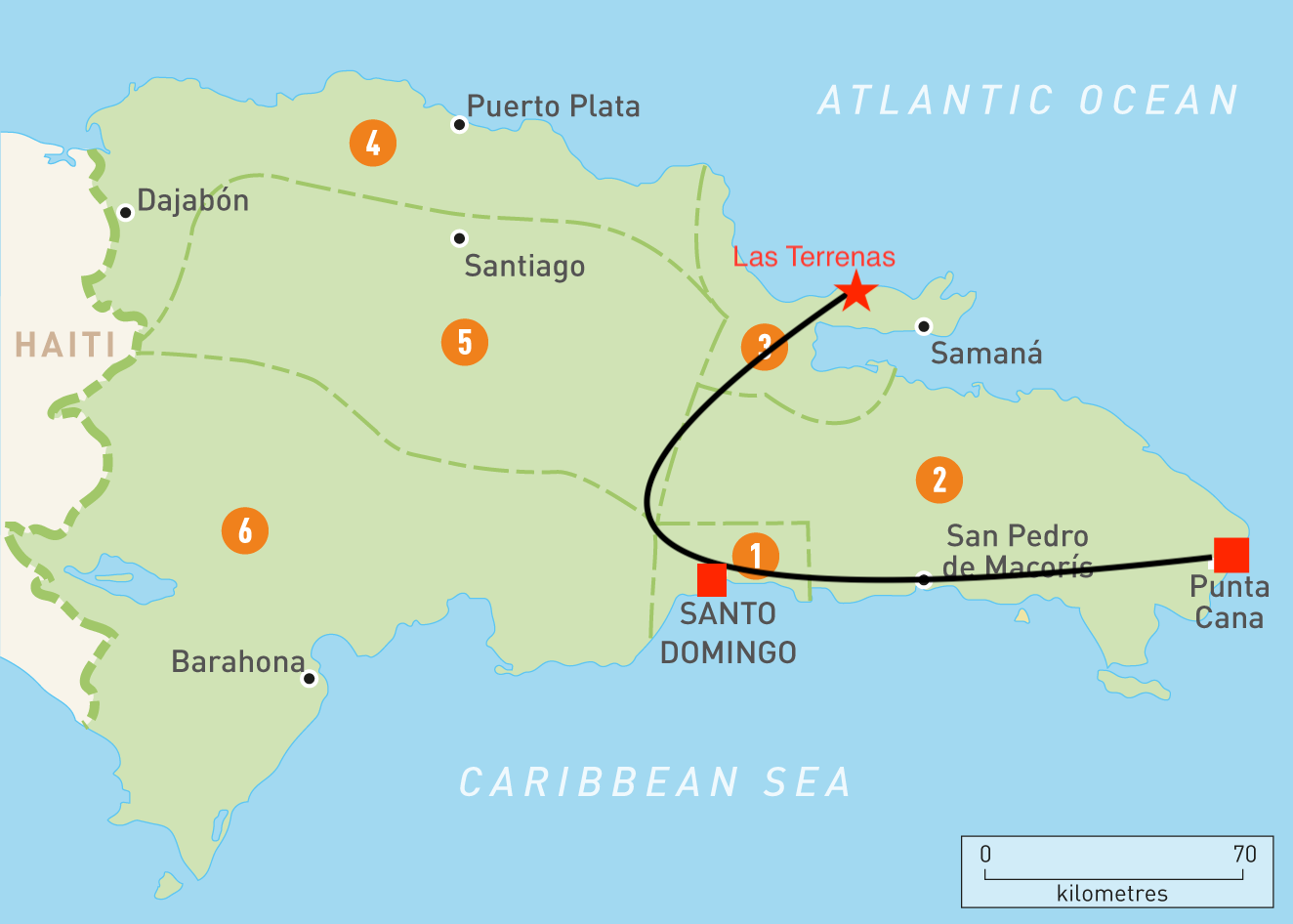 I asked her if there were any other options and she told me that there was another flight leaving to Punta Cana in 5 minutes.  I quickly tried to get in touch with my friend to see what she thought I should do, but I was unable to reach her.

“The Dominican Republic is a small island,” I thought.  “How far could these cities really be from each other?”  “As long as I get there,” I reasoned with myself.  Little did I know that Punta Cana was 5 to 6 hours away from my destination!  But I was already aboard the flight by the time I realized that.

I found a row of empty seats, plopped down, and finally reached my friend to update her on the situation.  Taxi and bus options were expensive.  It would be around $300 USD to get to Santo Domingo by taxi, and $150 USD by bus.  And then I would still need to get to Las Terrenas!  I didn’t have that much money.  But with nothing that I could do until I got there, I turned off my phone and settled in to what I thought would be a quiet ride.

Suddenly, I saw one of the other standby passengers that was in my same situation walk on the plane.  I honestly prayed she wouldn’t take the seat next to me.  Picture a Dominican woman with rollers and pins in her blonde hair, a gold tooth, and strappy sandals up to her knees.  Admittedly, I prejudged her.  She looked like a talker and I was in no mood to talk.  Plus, I wanted the space.  But apparently my row was attractive.

She sat down and immediately began talking to me.  Her name is Virgen.  Yes, Virgen.  She was a whole vibe.  She offered me snacks and asked what I planned to do.  After telling her that I didn’t know, she told me that she talked to her friend Benny who used to live in Philly and asked him to pick her up.  She said that I could ride with them to Santo Domingo if we “just give him some gas money.”  Feeling like I had no other option other than to break bank I didn’t really have, I accepted her offer and immediately felt grateful that she did in fact sit down and talk to me.

After a 4hr flight, we arrived in Punta Cana to unthinkable heat.  Had to be in the high 90s.  I followed Virgen outside, through the crowds of people to the pickup area where her friend Benny was waiting with a smile.  She introduced us and told him of my situation and he agreed that I could come along.

A couple minutes later a man driving a beater car pulled up in front of us.  This was our ride.  Now…these were complete strangers.  But my desire to save money overpowered any concern.  Not sensing any bad energy, I got in the car with them.  Immediately they all began speaking in Spanish.  The driver, Hansel, didn’t speak any English. 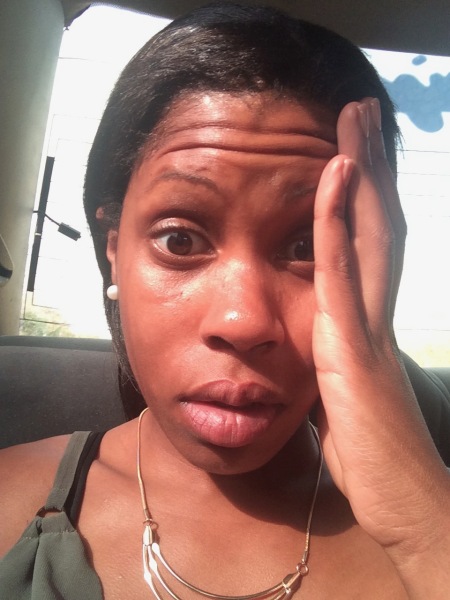 There was no room in the trunk so our bags were on our laps.  There was no AC, and if I remember correctly, the windows didn’t even roll down.  Did I mention that it was hot?!

I only picked up on every few words that they were saying.  “What did I get myself into?” I thought.  They could be planning to do God knows what to me.  Then I thought about how they didn’t know me either.  I could be a killer.

Before we got on the highway for a 2 1/2 hour ride to Santo Domingo, they stopped at a small roadside hut for two 40s.  As in 40oz cervezas…beers.  It was so damn hot, I welcomed the drink and started to let loose a little. 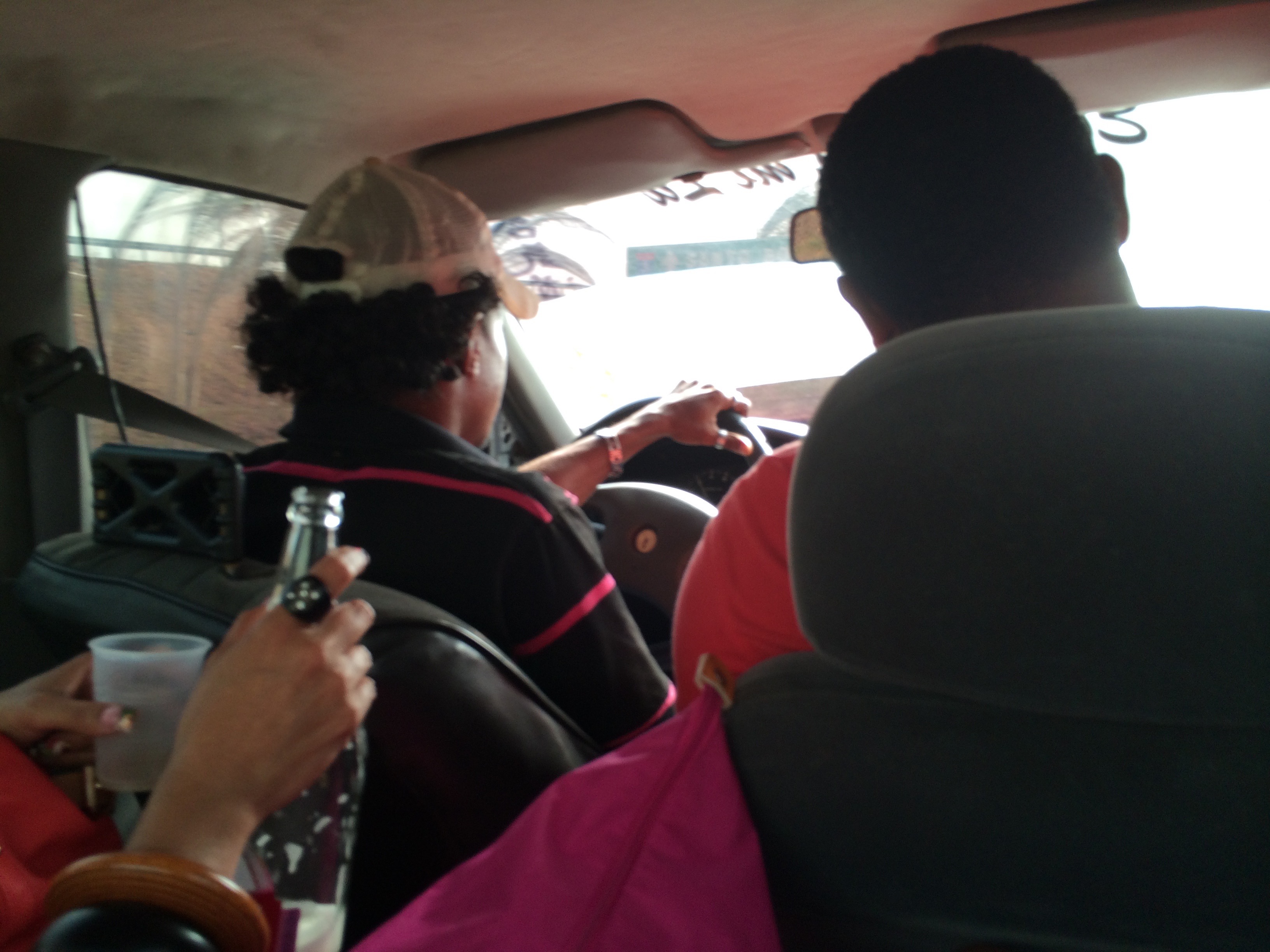 We got to the airport in Santo Domingo around 4pm to retrieve our bags, only to be told that the Airline personnel was gone for the day.  What the entire fuck?!  So now instead of getting my bags and thinking I would be able to get a taxi to Las Terrenas THAT day, I would have to stay in Santo Domingo for the night and go back to the airport in the morning.  Other than the clothes on my back, I only had a pair of sweatpants and a cheap SAME SAME BUT DIFFERENT tank top I got in Thailand.  This was quickly turning into a disaster, and now I had to think about paying for a hotel.

Virgen, who was now pissed off because this mess was ruining her birthday weekend, wanted to be taken to the bus station.  Benny offered to take me to a hotel or to come stay at his house with his wife.  My first thought was, “uh…yeah, hotel please.”  But something told me to accept his offer.  Maybe it was the mention of a wife that made me comfortable.  Again, my shallow pockets overpowered any concerns.  As we dropped Virgen off, she told me not to trust anybody, but that I could trust Benny.  Shit, how did I know I could trust her?!  This could all be false comfort.  I was being risky.  But that’s me.  I take risks.  Plus, something about Benny reminded me of my brother.  The energy was good.

The sun started to set as we drove away from the city center and into the barrio.  Benny and Hansel clearly lived in a poorer part of town.  Their neighborhood only got electricity from 9pm to sometime early in the morning so when I first got there, there was none.

Upon entering Benny’s home, I was surprised to see how immaculate it was considering how the area looked on the outside.  He introduced me to his “wife”, aka his girlfriend Sandra, who also didn’t speak English.  The first thing they did was feed me.  Chicken, rice, salad – it was so good!  Then they offered to take me on a tour of the city. 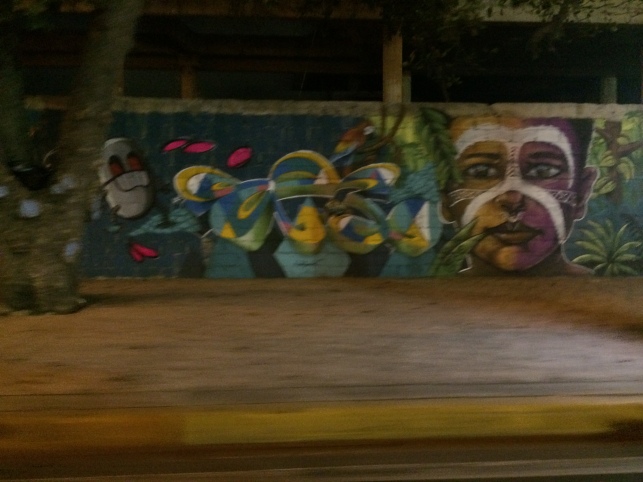 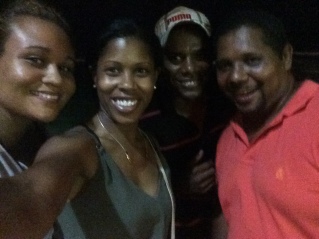 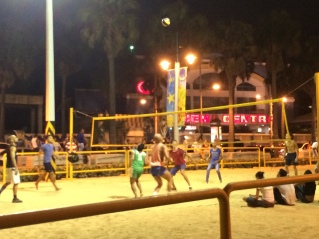 On the way back to their place, I was so tired that I passed out in the car.  Once back inside, they showed me my room and how to use the shower – which was not a running shower like we are used to in the States.  It was basically using cold water out of a bucket.  I couldn’t believe how gracious they were being to me, a random American black girl that they just met. 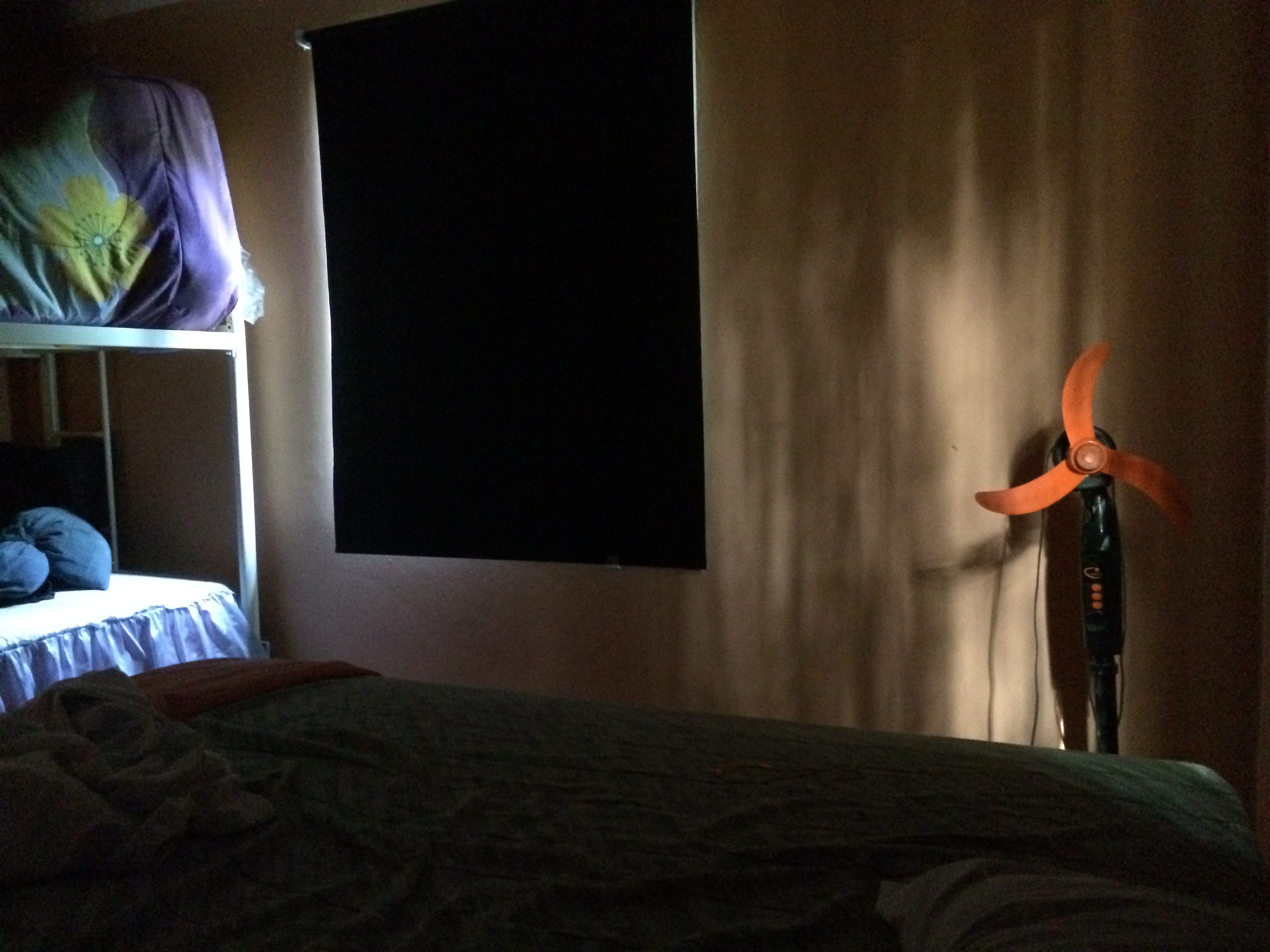 As soon as I got in the bed they had made for me, I was out like a light.  Anything could have happened.  It’s not uncommon to hear of women being raped, kidnapped, robbed, killed even…especially while solo.  However, this was not my fate.  Instead, I had a great night’s sleep and was awoken by the sounds of roosters crowing and dogs barking around 6am. 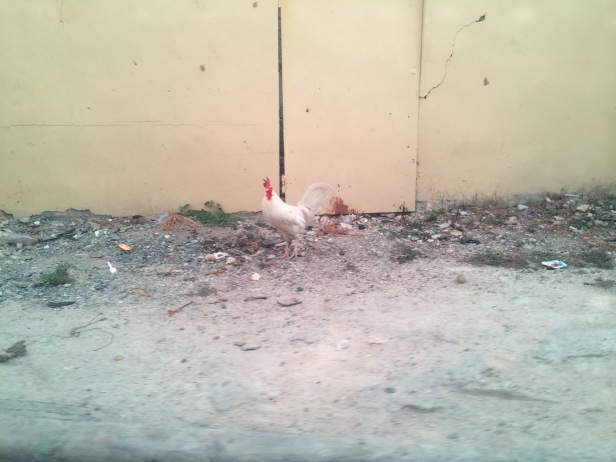 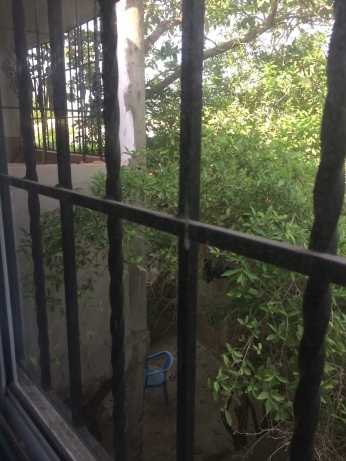 That morning, Sandra gave me some juice and crackers and Hansel came by to pick me and Benny up. 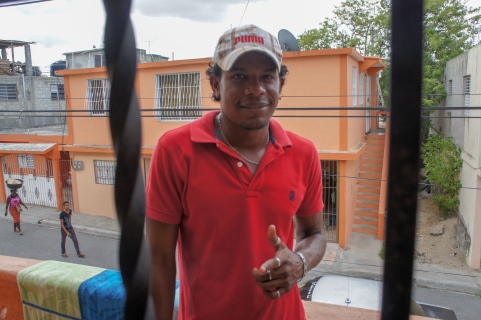 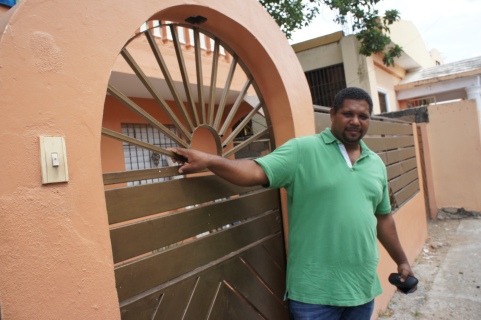 They said that after I got my bags from the airport, they would take me all the way to Las Terrenas!!!  I couldn’t believe it!  The only thing they needed was gas, which I was more than happy to pay for.  I was so grateful.

Gas is very expensive in DR, and it wasn’t until we stopped for some that I realized that I was sitting in front of a propane tank the entire time!  They run their cars on PROPANE!  It’s cheaper than gas.  In the U.S., I’m used to propane being used at BBQs and on King of the Hill, so this made me very nervous.  What if we blow up?!  No wonder there wasn’t room in the trunk!

Nevertheless, we were off.  For some reason, Virgen didn’t meet back up with us at the airport like we planned, but I’m so thankful for her.  She was the first savior of my trip.  Over the next four hours, me and My Buddies were essentially on a road trip to Las Terrenas. 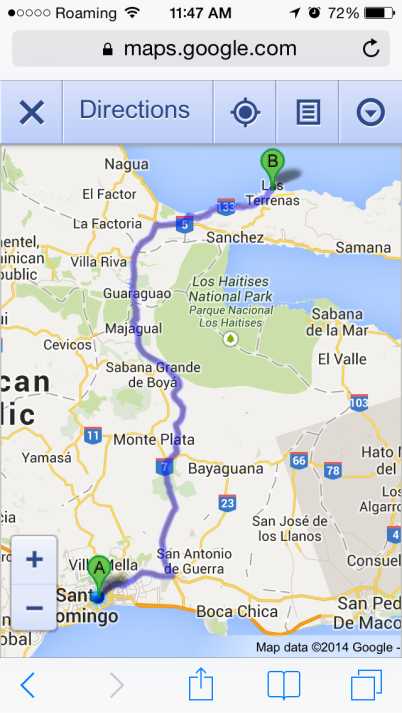 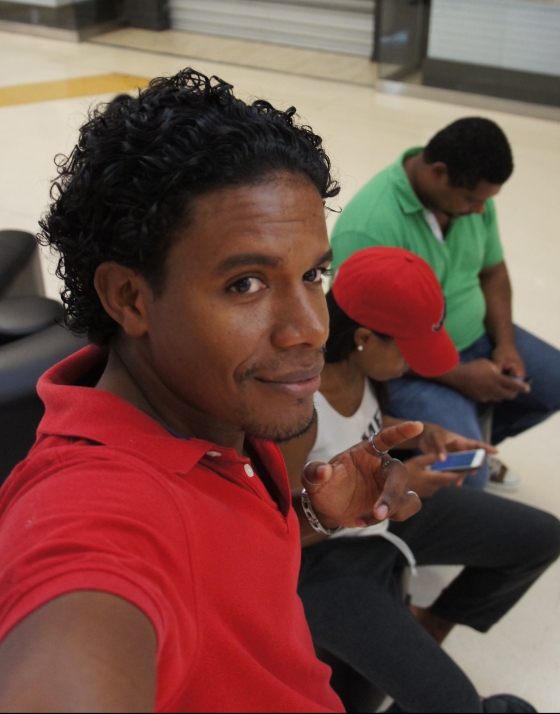 Hansel loved my camera.  We stopped at the mall, they showed me Chinatown and the equivalent of the White House, we ate tasty roadside pork (which a few days later got me very very VERY sick on the beach).  We had a blast!  I’m so happy things didn’t go as planned. 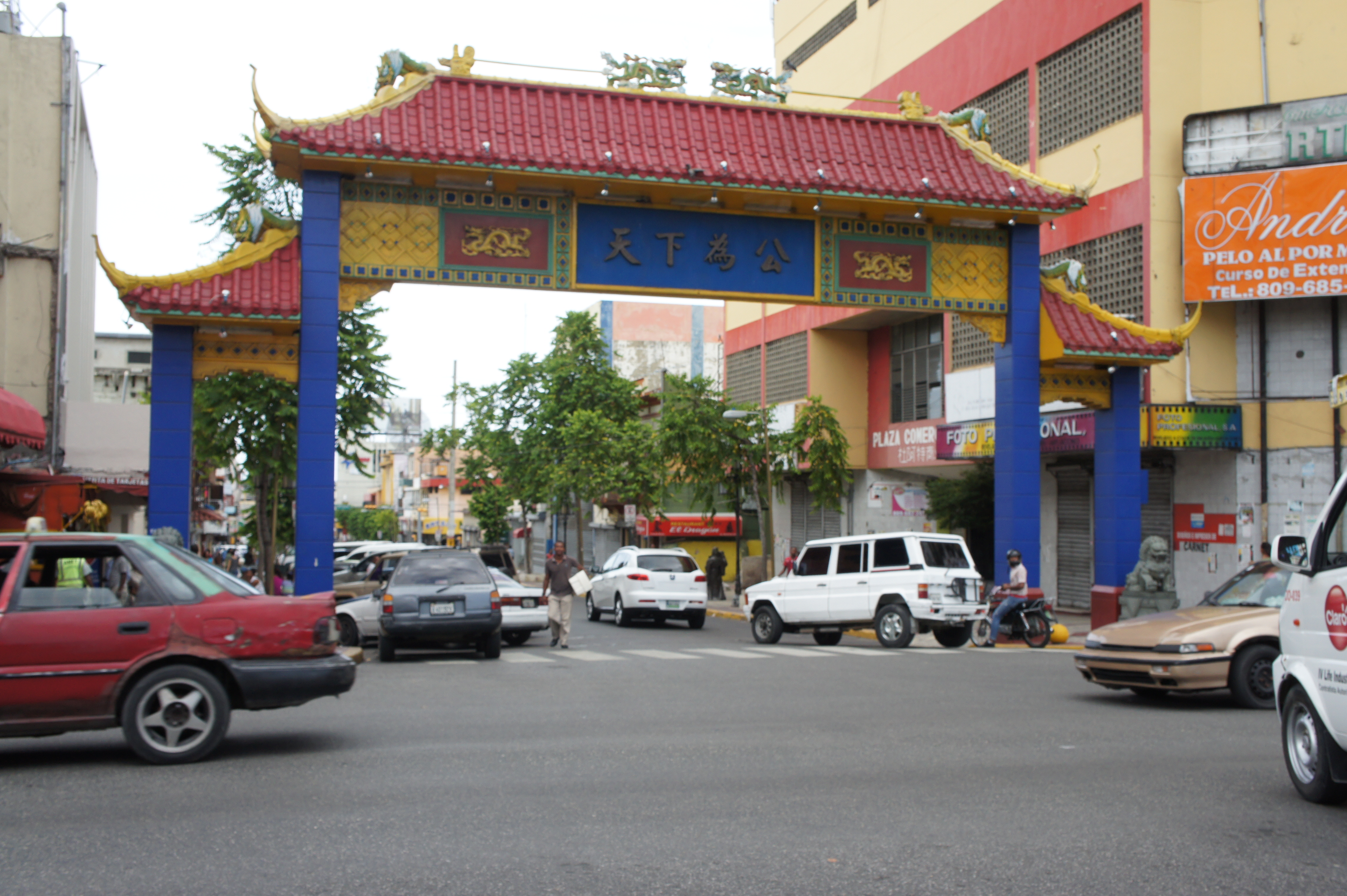 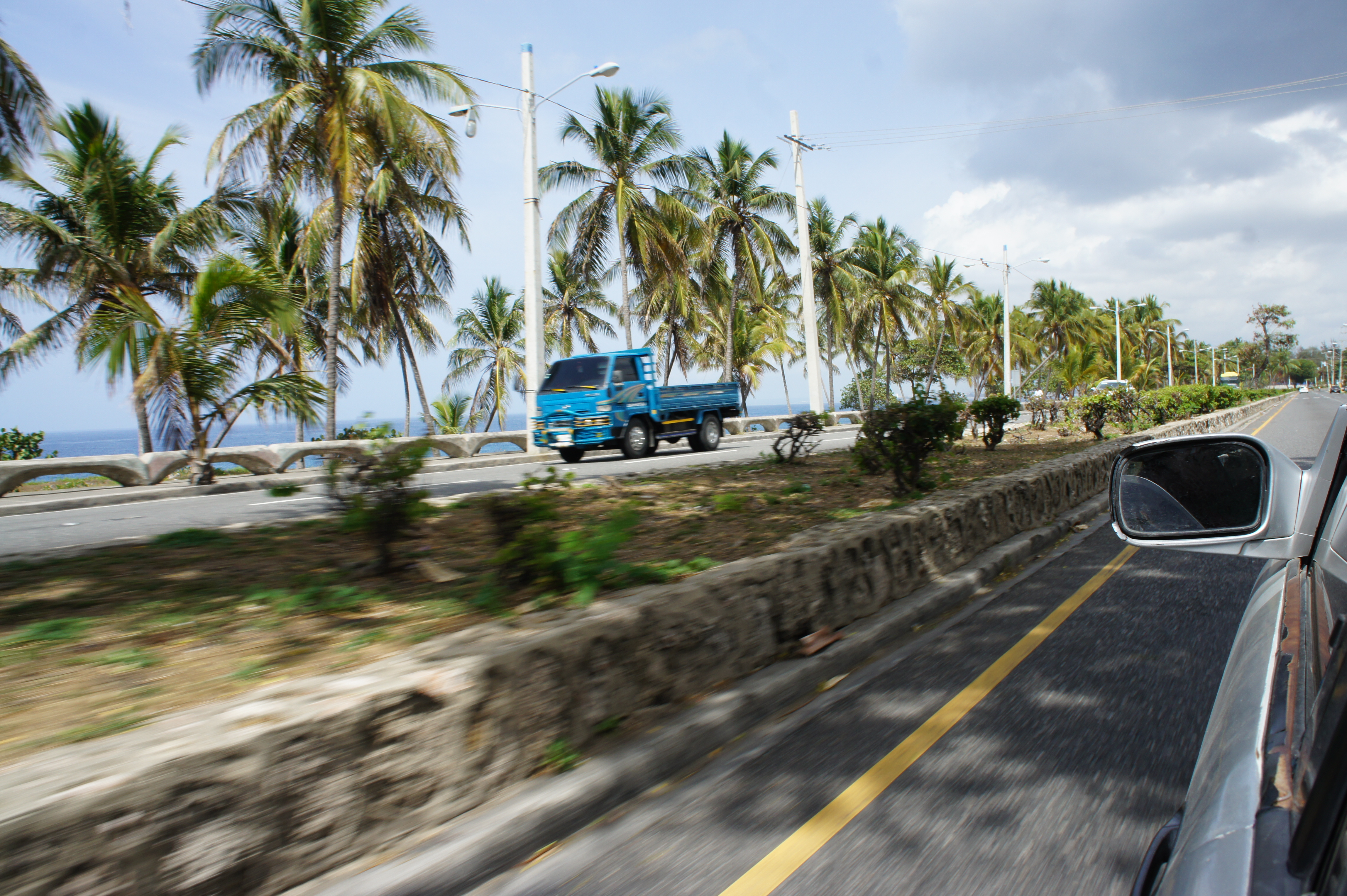 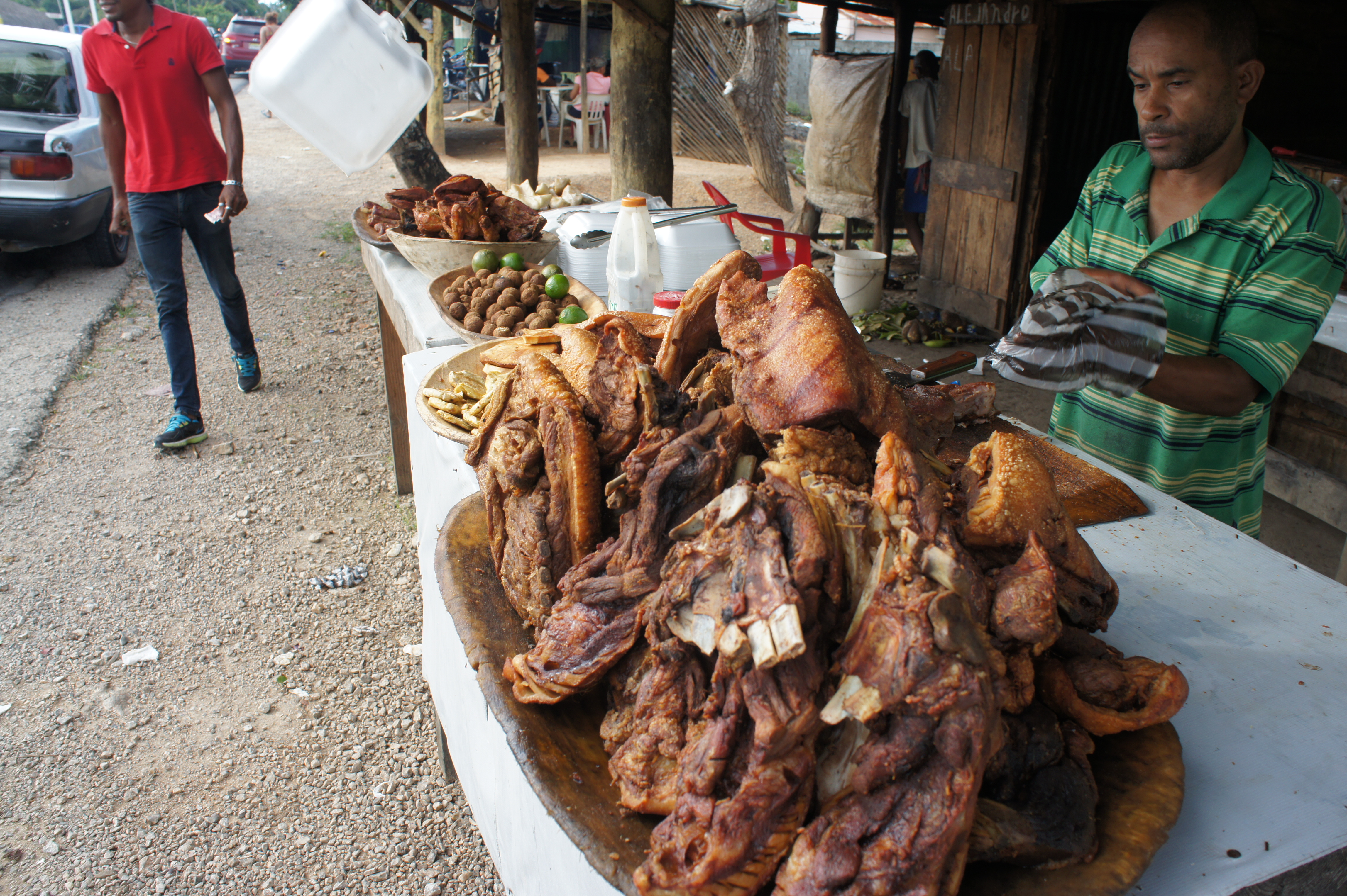 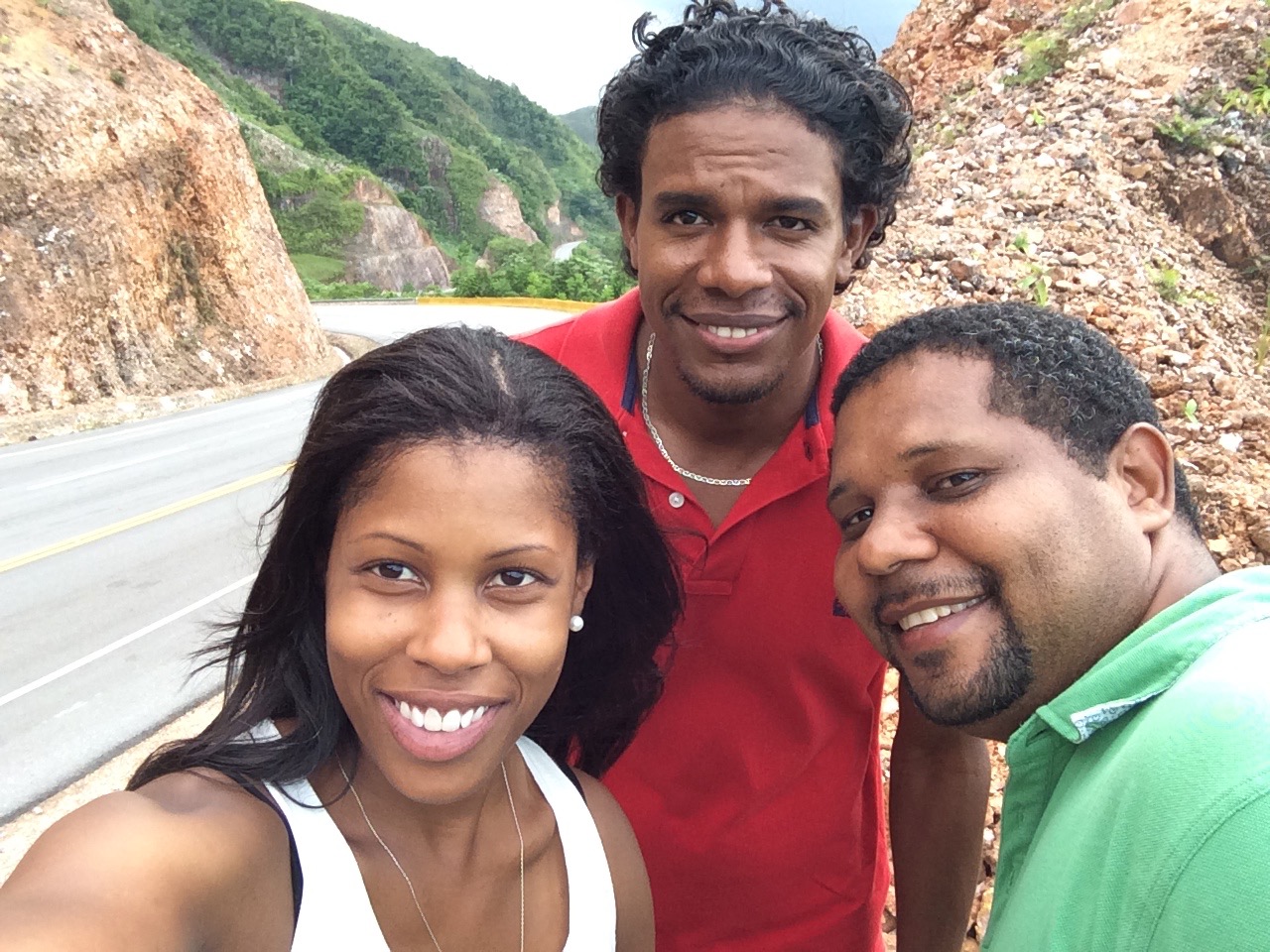 Here were two grown men who, in the grand scheme of things, had less than I did, and they went out of their way to help me without asking for anything in return.

In the end, it was a road trip to remember.  Initially, I thought my vacation was going to be ruined.  I just wanted to get to that beach paradise.  I got there – albeit a day and a half late – but I had an unexpected cultural homestay and made two new friends, which arguably was the best part of my trip.  And most importantly, they got me to my destination safely. 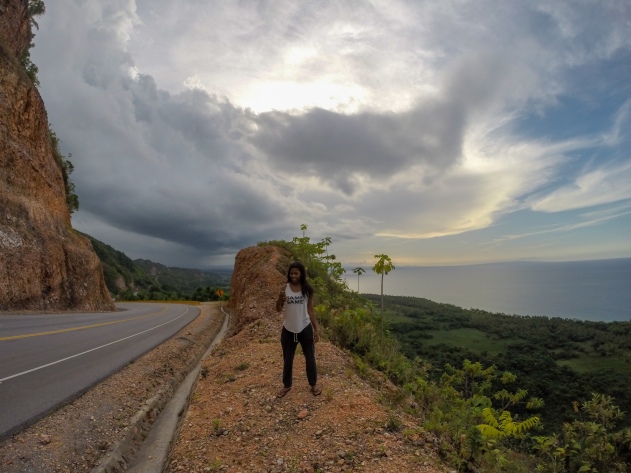 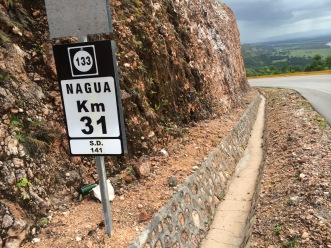 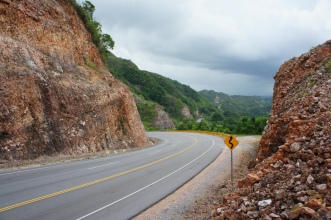 I bought them beers on the beach before they headed back home.  I can honestly say I was sad to see them go.  We stayed connected through WhatsApp and Tango for at least a year after that, but have since lost touch.  I will never forget Benny and Hansel, or Virgen – the woman I initially didn’t want to sit next to me.  She made it all possible. 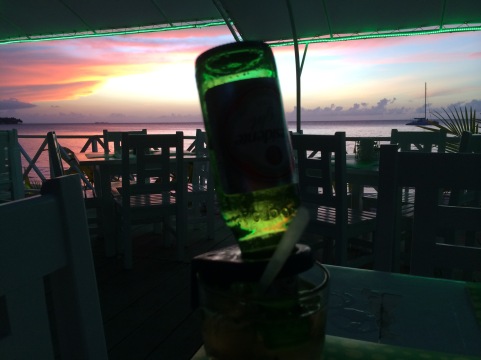 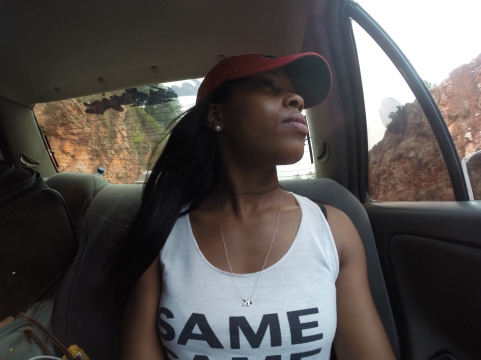 To my three angles in DR: Kindness Lives! 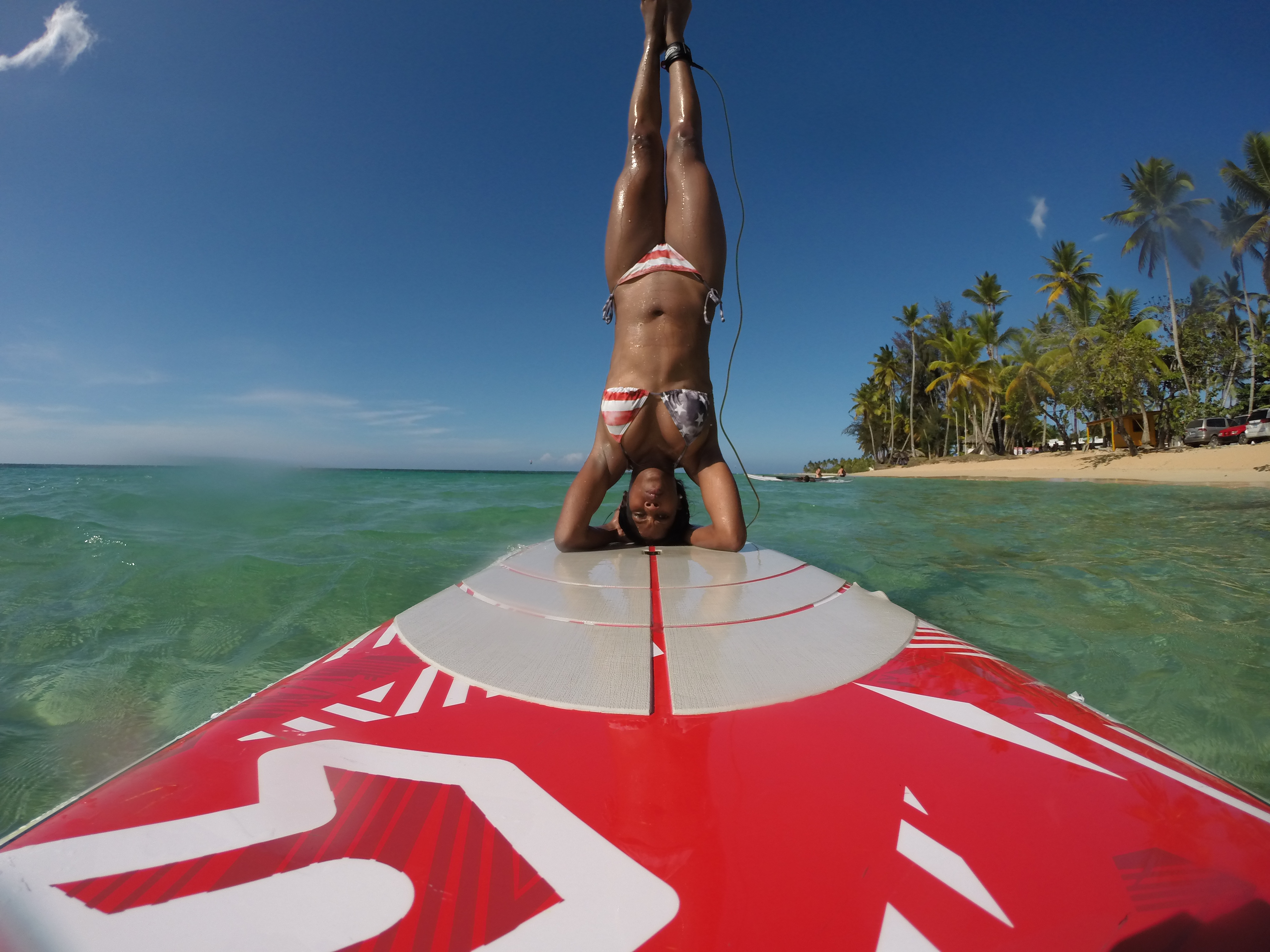 Can you think of a time when you were met with pure kindness from strangers?  Tell me about it in the comments!